Fresh off the release of their fourth full length Symptons + Cures, Comeback Kid have embarked on their habitual trek of constant touring in jam-packed clubs, this time alongside the likes of A Wilhelm Scream, Living with Lions, Parkway Drive and Four Year Strong. Vocalist Andrew Neufeld walked the streets of Vancouver while chatting with Mark Millard about the new record, its direction and notably, where he’s individually at now as opposed to three years ago when he first made his debut in the front man position.

Incidentally, Survival of the Fattest was this writer’s favourite compilation ever.
Source END_OF_DOCUMENT_TOKEN_TO_BE_REPLACED 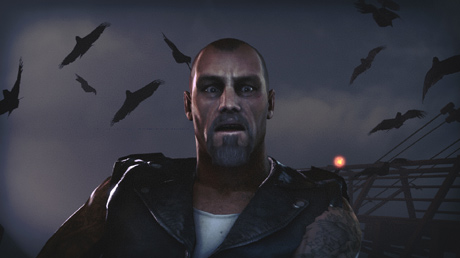 The final chapter of the Comic is coming!

“The Sacrifice” campaign for Left 4 Dead 1 is coming!

“The Sacrifice” and “No Mercy” campaigns for Left 4 Dead 2 are coming!

And? And? And? We set up a page here that we will be updating all weekend on what’s coming, including some surprises! Today’s update is the trailer and some awesome screenshots.
Source END_OF_DOCUMENT_TOKEN_TO_BE_REPLACED

Paper and Plastick has signed solo artist Dave Hause of The Loved Ones. Set for release in January 2011 on Paper + Plastick, Hause will release a CD EP and 7″ in November containing a new song along with additional songs on the B-side. In anticipation of the upcoming 7″, Hause recently announced a handful of U.S. tour dates with Two Cow Garage, as well as his first solo trip to New Zealand and Australia supporting The Bouncing Souls and Hot Water Music in December.

Punknews.org spoke to Dave last year about the Loved Ones and the aforementioned solo material.
Source END_OF_DOCUMENT_TOKEN_TO_BE_REPLACED

As Tall as Lions have notified fans through myspace that they are retiring for the foreseeable future. They commented:

After eight years of music, friendship, laughter, adventure, bliss, blood, sweat, tears, and everything else that goes along with it, As Tall As Lions are retiring for the foreseeable future. There is no sadness on our side, and we hope there is none on yours. We will be playing a handful of shows across the country to try and give everyone an opportunity to see us one last time. Our sincerest apologies to those who can’t join us at these celebrations, but know you will be there in spirit. Much love to you all, and thanks again for everything.

Corin Tucker Band, the eponymous new project from former Sleater-Kinney frontwoman Corin Tucker, have posted a stream of their debut. The group will be releasing 1,000 Years. Due out October 5, 2010, the album is the first post-Sleater-Kinney output from the singer and promises a quieter sound built with “acoustic guitars, keyboards, interlocking percussion, even cellos and violins,” The band also features Unwound’s Sara Lund and the Golden Bears’ Seth Lorinczi.

Check out the stream via NPR until October 5th.

Sleater-Kinney called it quits after released the critically acclaimed The Woods in 2005.
Source END_OF_DOCUMENT_TOKEN_TO_BE_REPLACED

Chiodos have launched a stream of their new album, Illuminaudio.

Find it on their MySpace page.
Source END_OF_DOCUMENT_TOKEN_TO_BE_REPLACED

Atreyu will be releasing a new five song EP featuring covers of the band’s influences. Bands set to be covered include Dead Kennedys, Volbeat, Deftones, Aerosmith and Thin Lizzy. For each cover, the band will collaborate with the band’s on their upcoming headlining tour. Those bands include Chiodos, Blessthefall, Endless Hallway and Architects.. The set is due out October 12, 2010.

Our stream today comes from Las Vegas, NV’s Caravels. We’ve got a stream of the band’s new EP, Floorboards, which our reviews editor Brian Shultz called an “incredibly dense and yet thoroughly interesting, non-specific blend of brooding, modern hardcore, ’90s screamo temperament and gloomy, lumbering post-rock elements … It’s a progressive and circuitous sound offering few hooks to satiate early or even later listens, but it’s a rewarding investment all the same.”

You can check it out on their Punknews.org page.

The band recently signed to Topshelf Records and the label has plans in motion to give Floorboards a wider release.
Source END_OF_DOCUMENT_TOKEN_TO_BE_REPLACED

Kind of Like Records has announced plans to release a split 7″ from Milwaukee, WI’s Direct Hit! and Cincinnati, OH’s Mixtapes on October 26, 2010. For the release, each band will offer a new song as well as a cover of the other band’s new song. More photos of the packaging can be found here.

Lovitt Records has posted an update on some new and upcoming releases in the works. Among them is a 7″ from Bats & Mice entitled Back in Bat that’s freshly released, as well as a new full-length from Des Ark entitled Don’t Rock the Boat, Sink the Fucker and a new single from Frodus.

We’ve been getting some emails asking a lot of the same questions answered on the Mann-Conomy F.A.Q., so we thought we’d go ahead and send the link around again for those who missed it.

While the band hasn’t completed work on Daybreak, Saves The Day will be previewing some material from the record on a new digital EP, 1984. According to the band’s Facebook Profile, the digital EP will be available at the merch table as a download card, and will feature new songs, “1984” and “Let It All Go” (acoustic).” The EP will conclude with new versions of “Driving In The Dark” (acoustic), “Hold” (electric) and “Stay” (electric).

Daybreak, when released, will be the third album in their trilogy of recordings which includes 2006’s Sound the Alarm and 2007’s Under the Boards.
Source END_OF_DOCUMENT_TOKEN_TO_BE_REPLACED