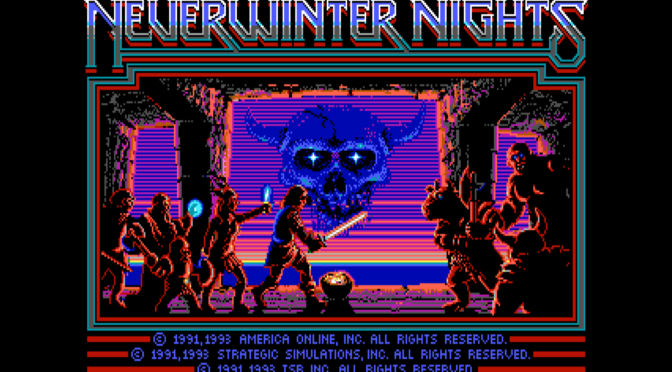 The AOL NWN version is called Neverwinter Nights – Offline. You can download it as a stand alone module for FRUA, but it’s not nearly as straight forward as I had hoped. It appears that one of the ways designers have tapped into the full potential of FRUA was to hack it in addition to using the built in tools. Because this isn’t a straight forward module, this takes a bit more work than a normal FRUA module.

The first thing you want to grab is Forgotten Realms Unlimited Adventures. I prefer Forgotten Realms: The Archives – Collection Two on Good Ole Games, GoG.com. You get FRUA in addition to a nice collection of Gold Box originals like Pool of Radiance, Curse of the Azure Bonds and Gateway to the Savage Frontier.

Keep in mind that once you mod FRUA as NWN OFFLINE, you shouldn’t make any additional changes or you will risk losing your game. I’m sure there is a way to work around this, but I just started and managed to overwrite everything a few times playing with other modules.

This next part is where I deviate a bit from the traditional modders for FRUA. Since this is new to me, I found the path of least resistance using a newer tool called FRUA Module Manager. You can find the download link to FRUA MM on that page.

Install Forgotten Realms Unlimited Adventures normally. If you install it outside of the GoG folder, make sure you know the path because it’s important to the instructions.

Lord Nasher, My old Friend, How I’ve missed You!

I hope you found this helpful and I hope you have as much fun wandering through old memories as much as I am. May you slay the Beholder on your first try and may you remember the best way to fight the Dragolich. Well, at least by the 10th try. 🙂

If you have any great memories about AOL’s NWN, feel free to share them in the comments section. If any part of the instructions don’t see right, please let me know.